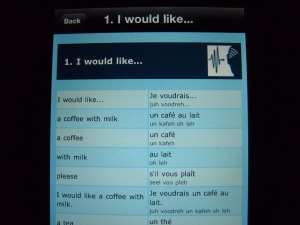 I have to say, it hurt. It hurt quite a lot to pay £5.99 for an iPhone app. Five British whole pounds and ninety-nine pence!

“…O.k.,” I thought grudgingly, “This language app better be worth it, I tell ya!”

So as I made my merry way home on the train, I listened to a French woman telling me in English to sit back, relax, enjoy the music, listen to the words, and see what happens.

The music started to play and I listened intently to the English man and the French woman flirting with each other, saying the phrases to the rhythm of the music.

It’s catchy, too catchy, and before too long, what started off as me silently mouthing the words, turned into me mumbling ‘un kafeh oh leh’ (un café au lait/ a coffee with milk) out loud.

The woman sitting next me looked uncomfortable, and slowly moved away from me. Oh well, more space for me.

My knowledge of French before this magic app, apart from the obvious hello/goodbye, etc. malarkey, was limited to the following useless random words/phrases thanks to rote learning:

aller à la piscine– to go to the swimming pool

aller à la patinoire– to go to the ice rink

J’ai douze ans– I’m 12 years old (This was my favourite phrase to fall back on if I ran out of French words. I learnt French for a year when I was 12- when I do automatically repeat this, people just laugh for some reason)

But with the help of this app, I was picking French up relatively quickly.

For example, when I tried to speak German with a friend, she told me I had a French accent.

I even woke up one day, and had the music playing in my head with the phrase ‘don luh sontr veel’ (dans le centre-ville/ to the city centre) in my head. The ‘earworm’ worked- huzzah!

It was time. I was ready.

So with zest and a spring in my step, I set off to Paris, determined to use my French. And to see mon mec, of course.

I went into a bakery determined to order something in French.

The lady smiled and went to get my order. She understood- HA!

I felt great, so great in fact that I blurted out in English to Monsieur L-O: “I did it, I DID IT!!!” and I smiled with my signature stupid grin.

The other customers obviously overheard and smiled knowingly. They probably thought, silly little English girl, bravo for stringing a sentence together.

However, when I was still feeling pleased with myself, the lady came back to me and said something to me in French.

I quickly deflated. What did she mean?? I stared back blankly, then looked over to Monsieur L-O for some help.

He responded and then everything was right in the world.

I did try to speak French when I was by myself at the train station, but the lady just responded to me in English- spoil sport.

It’s reported that Fabio Capello claimed he only needed 100 words to manage the English football team. I’m not sure he needs more than that to be honest- don’t hurt me!

I don’t know if I’ve reached the 100-words barrier yet, and I can’t be bothered to count the words either.

But, since I’m down with the kids, it’s only right that I leave you with a random ‘cool French’ phrase from the Beeb’s website: “J’ai les boules” (completed with the appropriate gesture).