The whole story started off gloomily. My housemate had just been let go unceremoniously from the school earlier than she had expected. She had another job to go to but the problem was that this wasn’t due to start until a month’s time. She thought she would give the school a month’s notice, but Mexico doesn’t appear to work on those standards. She was understandably worried about finances and the fact that she would no longer be able to afford the vocho, an old blue mini, that my housemates had been ogling a few days ago.

Martin went out of the house for a while and then came back. He invited us outside, and to Sara’s surprise, the vocho was parked on the driveway. Everyone was really excited, including Piña the cat; Sara was really thankful and the sight of the car on the driveway of our new house made everything feel complete. 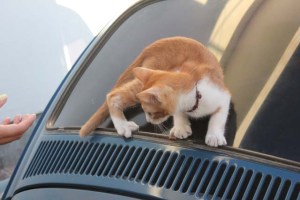 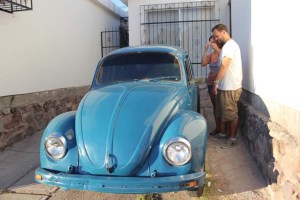 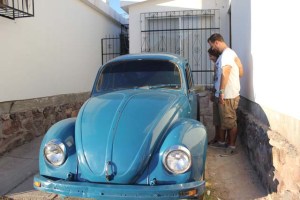 Sara wanted to test drive the car, especially since she would need the car to drive to her new school as it was a bit far away. She really needed to practice; she hadn’t driven in a while, and when she drove a car a couple of weeks before, it was a little bumpy to say the least. But disregarding this fact, we all decided to take the car for a spin to the centre of town, during rush hour, so that she could practice driving – schoolboy error.

Martin drove to the centre and then stopped in a car park so that Sara could drive back home. After a jerky start, we were off and things were ok, considering. This was until all of a sudden I heard someone shouting and saw someone angrily flash their torch at us as we were driving past. It was a traffic cop and we had just driven past her when I’m guessing we were supposed to stop. In fairness, it was pretty dark and she wasn’t wearing a hi-visibility vest.

We had to stop at a red traffic light around 50 metres away. I decided to provide some light-hearted commentary.

“Oh my gosh, she’s coming,’ I said half amused.

You could feel the tension in the car; my housemates didn’t say a word. I think we were all just waiting for the red light to change so that we could just drive off. It didn’t.

I turned to the rear window again to check where she was. “She’s getting closer. Wow she’s really powering through.”

Silence, but the silence was deafening.

“She’s right behind us.”

“Thanks Monique,” somebody dryly said.

The police woman tapped on the window and told Sara to pull up. She did, but the extra stress prevented her from parking properly, so in the end someone else had to do it. She was scared, Martin was pissed off, and I was just kind of taking it all in and provided a running commentary to my friend on Whatsapp.

Sara didn’t bring her driving license, she was apparently speeding (the speedometer wasn’t working), she didn’t stop when she was told to, the car didn’t have license plates and we were travelling without registration documents. We were there for a while, while the policewoman constantly asked us (Sara) questions in a menacing way. She looked into the car to see who else was in there. She thought I was a man, great. She was threatening us with fines and said the car may be taken away. Sara pleaded for her not to and said that we were all just foreign students. It didn’t seem like she cared. Some more things were said that I couldn’t understand.

In the end, Sara got back into the car with Martin at the steering wheel and told him to go quickly. I thought at first that she was trying to escape from the policewoman; that really wouldn’t have been a smart idea. I had images in my head of a ‘high-speed’ police chase in our old banger with the Mexican police and their big-arse machine guns behind us taking fire. I definitely would have died. But apparently the woman just said that we could go. We went quickly before she had the chance to change her mind. We all just laughed in disbelief and relief. I clearly found it more amusing than they did, but vowed I wouldn’t write about it until their emotions had settled down. I’m pretty sure that time has passed by now. So what did we learn? Many things, you might expect. Not as much as you would think, actually, and this became apparent in our second encounter with the Mexican police, which was a little more… eventful…