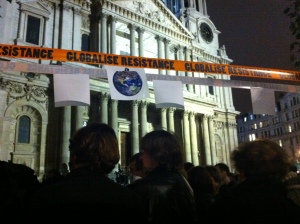 The speaker then went on to say that if St Paul’s withdrew their welcome, then if they stayed, it would only constitute a civil offence, not a criminal offence. Therefore the police could not move in with force. They had to apply for a court order first. The protesters were safe at least until Monday.

This public announcement was my first impression of the Occupy London Stock Exchange (OccupyLSX) group outside St. Paul’s on Friday after work, six days after they first set-up camp. No megaphone was used. Instead the speaker’s words were echoed by the crowd. It was spontaneous. At first it felt slightly claustrophobic being surrounded by a sea of people repeating the same thing in some sort of single organic entity. Demonstrating solidarity, affirmation and crowd mentality? Nonetheless, I found it intriguing and it was an effective way of spreading a message.

I then saw a quiet circle of people sitting on the floor. Only one person spoke at a time with some members of the circle gesticulating at certain points of the speaker’s speech. It looked like a game with coordinated jazz hands and random karate-chop blocks with both hands.

It turned out that I was observing the ‘tranquillity team’ whose job it is to bring some sort of order. They appeared to me as the camp’s ‘Elders’. But a guy I spoke with made it clear that there was no sort of hierarchy. Everyone was equal and anyone could join in and contribute to discussions.

Decisions were made on a consensus basis, the majority did not rule here. Each hand gesture signalled a visual representation of a person’s approval for a proposed idea (the jazz hands, but with less pizzazz), or their disapproval (the crossed or blocked hands).

“What happens if someone doesn’t agree?” I whispered to a member of the team.

“Then it will keep on going. Proposals will keep being offered up until there is a unanimous agreement,” the guy replied. I’ll call him Bob from now on (I forgot to ask his name, I know, school-boy error).

Their decision-making method sounds like a nice concept. It seemed to be working for them so far. I’m not sure how it would work if anything really contentious came up. I’ve been to church meetings with ‘Christians’ and they can be the most long-winded, drawn-out thing, ever! They can even turn ugly- and this is without the arduous task of getting everyone to agree.

The issue the tranquillity team were discussing tonight though was security. Apparently late the night before, a group of people came to the camp and started kicking the tents whilst people were sleeping. So tonight a rota was being drawn up for people to keep a look-out. They didn’t like it when I used the term ‘security guards’.

“So do you all agree on a solution then?” I asked Bob.

“No we don’t. The protesters are so diverse, so everyone offers their own opinions on how we can move forward,” he replied. He explained that that was actually a good thing because then debates would arise and discussions could be held. It was about sharing ideas. They even had a make-shift library and a lecture spot to cultivate a learning environment.

“And the bankers in the area, how have they responded to your protest?” I asked.

Bob smirked. “We’ve had debates with a few of them,” he replied. That was all he offered.

Bob told me he had been at the camp since they set-up on Saturday. He said there was a real community vibe there and that you got to bond with total strangers. I sensed the warm connection between people. I felt comfortable there and people were really friendly.

Bob pointed out the portaloos to me. He showed me where the donation box was for St Paul’s Cathedral, and directed me to where the kitchen was situated and said I was free to get something hot to eat or drink. I could make a donation towards it if I wanted to. Then off he went into the night. The rest of the team went away to rest and eat before the General Assembly commenced later on in the evening.

I walked around the camp to explore the different areas. The protesters told me that a fire crew went to the camp to carry out a risk assessment of the kitchen, so apparently it was all approved. Aside from the lecture spot and the library area, the camp also boasts a legal tent, a recycling area, a first-aid tent, and an information tent. And forget hippy acoustic guitars with people holding hands and singing Kumbayah (though there were a few guitars. Not so much singing or dancing)- I saw a piano-not a keyboard- a piano! 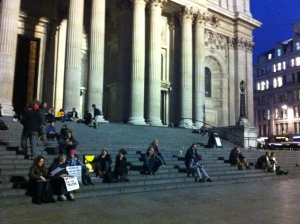 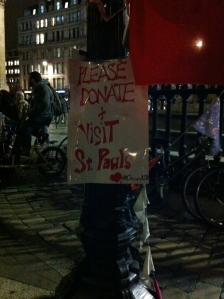 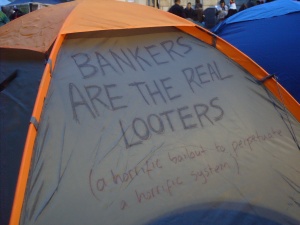 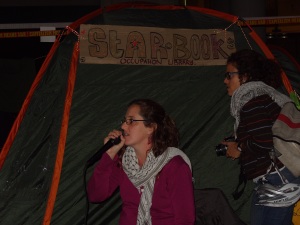 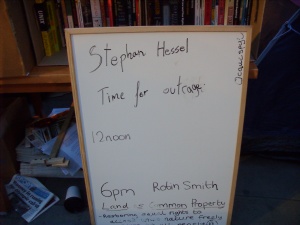 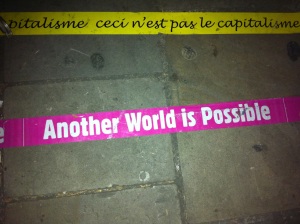 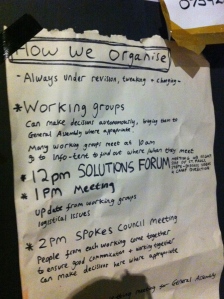 There definitely was a variety of people there. I saw a tent marked ‘Anonymous UK’ where the members wore masks. There were students and even full-time workers. There were also a lot of people there who were simply curious, like me.  They were talking pictures and filming the protesters. There were obviously reporters from BBC News and other news organisations. Some of the protesters wanted to know how they were being portrayed by the media to the outside world, so they hung around to listen to the live reports. 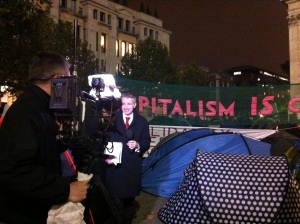 I saw a few debates with passersby. One accused the protesters of being lazy because they were there all day instead of working and contributing to society. A few of the men explained that they stayed overnight and went to work in the mornings. Then after work they came back to the camp.

There were many of theses mini-debates scattered across the camp. I listened to the usual communism rhetoric. I saw a smug-looking man in a sharp suit deliberately trying to wind up a protester. He succeeded. I overheard one protester’s bizarre solution to the financial problem was that everyone in the world should be given £20k. In another debate, one protester simply expressed that there should be tighter financial regulation. As already stated, the solutions were varied and vague and this is the main point of criticism against the protesters.

Even so, the OccupyLSX group has become a talking point, and as such I think the protesters have helped to facilitate discussions surrounding our present economic woes. People are now either a bit more receptive and open-minded about thinking of alternatives, are sympathetic from a distance, or at the very least agree that there is always room for improvement with the current system. This is because of the uncertainty surrounding the current economic climate. Maybe one day we can move beyond the dichotomy of capitalism versus communism. And for those who say that the protesters won’t change anything, well one thing is for sure; you can’t change anything if you don’t do something.

To date (27th October) since my visit on 21st October: