In my former flat, I used to live right on the main road. The increase of the noise outside alerted to me to events that were happening on the street. I would run outside with my camera, in the hope of trying to capture something, and I’d be pleasantly surprised to see various kinds of musical parades, if I got to the balcony fast enough.

On 5th November I saw my first protest in Mexico. I saw people with banners and pictures of faces, and I knew immediately what the march was about. 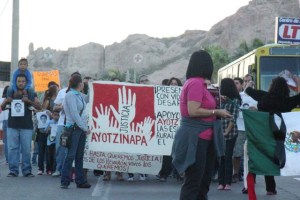 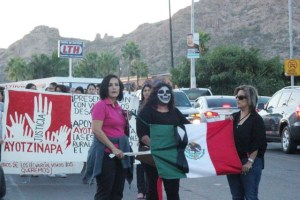 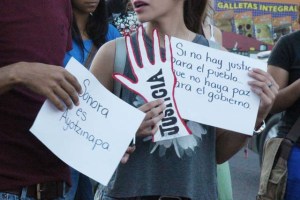 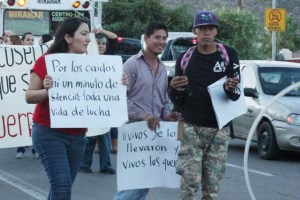 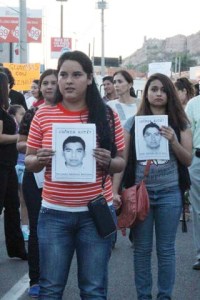 On 26th September 2014 43 students from a teacher training college in the Mexican town of Ayotzinapa went missing. Their plan was to travel to the town of Iguala, 125 miles from Mexico City, to protest against alleged discriminatory and funding practices from the government.

According to reports, police intercepted the students allegedly on the orders of the local mayor, Jose Lusi Abarca, as he wanted to prevent the students from interrupting a speech that his wife was giving on that day.

A clash ensued and the police opened fire on the students just outside Iguala, killing three students and three people in other vehicles, with many more injured.

Police officers seized students who were trying to run away during the shootout. They were detained at a police station and were allegedly handed over to Guerreros Unidos, a local drug gang. According to Mexico’s Attorney General, gang members have confessed to taking the students to a landfill site, killing them, and then burning their bodies, in the belief that they belonged to a rival gang.

The remains that were found at the site have been sent to a lab in Austria for analysis. Only one of the 43 students has been identified from the badly burnt remains. The families of the remaining 42 students refuse to believe that their loved ones are dead until they have proof. However, earlier this year, Mexican investigators stated that all of the students were dead based on confessions and forensic evidence around the landfill site, since the lab is unable to identify any more remains.

Understandably, many in Mexico are angry about the connection between the police, the drug gangs and local authorities, and this anger sparked nationwide protests. Many are also angry about how the case has been handled and how slowly it has progressed.

Since the incident, many people have been arrested, including gang members, police officers and the mayor and his wife.